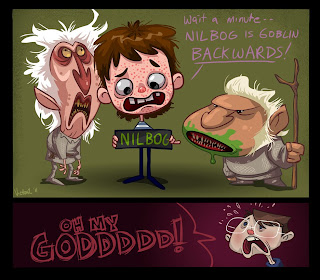 Hi guys! I'm starting a new feature on my blog called Classics of Crap, where I draw some of my favorite "so bad, they're good" movies. Kicking off this event is Troll 2, a movie I discovered one fateful night flipping around basic cable stations in the early 90's. I had seen and enjoyed the first Troll a few years earlier, so I figured, why not. After sitting through the whole thing, waiting for an actual troll to show up (Spoiler alert: they never do), I logged this one away as just another disappointing experience. After moving to LA, I met one of my best friends, Joseph, and he told me of a similar experience. As we watched it again, we discovered out opinion had completely changed. Suddenly, Troll 2 became a unintentionally hilarious comedy. Apparently, some other people thought so too. The "Oh my godddd" clip has been viewed on YouTube millions of times, and Troll 2 still plays at midnight screenings all over the country. So, remember kids, Nilbog is Goblin backwards, and remember to eat the ice cream. It's nice and creamy!
Posted by Jeff Victor at 5:52 PM