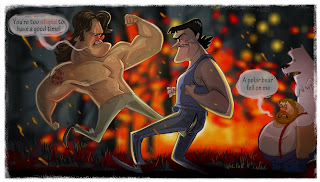 Hey guys, and welcome back to an ass kicking, gut busting, rootin tootin new Classics of Crap. There were a lot of tough guy brawlin' movies in the 80's, but none of them has as much affection or appreciation than the hilariously bad Road House. An instant camp classic when it arrived in theaters in 1989, Road House is a ludicrous movie about a tough (but sensitive!) bar room bouncer who gets caught up in a whole plot of intrigue, including pissing off generic town bad guy Ben Gazzara. On the way, he falls for beautiful Kelly Lynch, while in the movies most random moment ever, a stuffed polar bear falls for a portly 'Bubba redneck' type guy. There is much to like in this overstuffed turkey. The one liners, such as "Pain don't hurt", are priceless. After watching it, you will be so juiced up, you may want to punch somebody. (Probably the filmmakers.) Pain may not hurt, but this movie will.
Posted by Jeff Victor at 8:57 PM

Hahahaa! Totally awesome!!! Btw so happy that you're sketching with us. Rock on, Jeff!