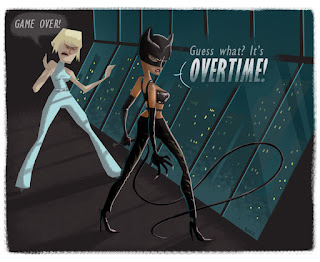 Hey Guys, and welcome back to Classics of Crap. Sorry I missed last week, as I am super busy working on some freelance projects. But now I'm back, taking on what can only be described as one of the worst ever superhero movies of all time: Catwoman. Warner Bros sunk one hundred million dollars into this flop, and it was universally derided by the public as well as comic book fanboys. But, is it worth seeing? Hell yes. It's a campy, trashy mess that will have you laughing till it hurts. Everyone is overacting like crazy, and the distorted fish eye lenses add a cheesiness not seen since the 60's Batman TV show. Obviously aping the Spider-Man films, Catwoman leaps and sprints over the rooftops in a hilarious CGI effect that is so painfully silly it's impossible to take seriously. The plot is absolute camp nonsense, where an EVIL cosmetics company wants to get women addicted to their skin creme. But...the skin creme is EVIL!!! EVIL!!!! It will melt your face if you stop using it! (How this would actually work in the real world is totally beyond comprehension.) But anyway, it's up to Catwoman to stop Sharon Stone and her evil plan to...sell a lot of poisonous skin creme. Go Catwoman!
Posted by Jeff Victor at 11:47 PM

So Terrible... Love the art as always though...

Very nice blog. Dude that drawing and video is RAAAWWWW!!!

I always forget that "Catwoman" isn't just an awful Halle Berry movie; it's an awful Sharon Stone movie. And that's saying a lot. But who could really live up to the promise of King Solomon's MInes? She set the bar too high too soon, poor girl.