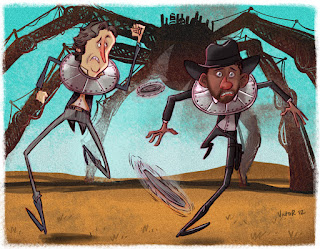 Hey guys, and thanks for coming back to my blog for another wild wild edition of Classics of Crap. Ever week, (or every other week it seems now) I draw the worst of the worst movie bombs ever. In the summer of '99, movie audiences had come to expect one thing over the Fourth of July weekend: a Will Smith blockbuster movie. Will Smith had smash after smash over this holiday weekend with hits like Men in Black and Independence Day. So, audiences (even me) were excited to see the latest from Will and his Men In Black director, Barry Sonnenfeld. And, oh my god, how disappointed we all were. Wild Wild West, made as a steampunk update of the 60's TV show, was so bad, so disjointed, so awkward, it became synonymous with bloated Hollywood excess. Dumb would be comedy and over the top CGI setpieces, mixed with terribly disturbing imagery, like using a man's lopped off head as a movie projector made for a flick audiences stayed away from in droves. Personally, I think the movie has a goofy charm, and some of the ideas are pretty clever, but it is a chore to sit through. The less said about Kevin Kline dressed as a woman, the better. *shudder* The best thing that came out of the whole fiasco was Kevin Smith's awesome verbal takedown of the Giant Mechanical Spider. Check that out after you watch the movie! See you next time!

Crappy goodness in every film... magic in every image posted...