Classics of Crap Volume 44: Nothing But Trouble 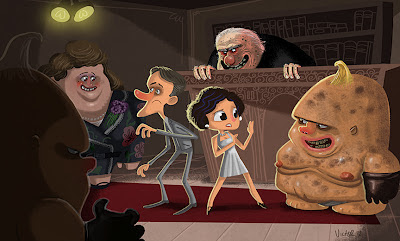 Hey guys, sorry I missed last week's Classic of Crap, I was animating my Empire Strikes Back Uncut segment. So, to make it up, I picked a real Grade-A stinker for you this week. 1991's comedy flop, Nothing But Trouble.
Dan Aykroyd had a stellar run on Saturday Night Live, followed by a string of brilliant comic performances in such films as Ghostbusters and Trading Places. But all that came to a screeching halt with this ill-advised passion project. As writer, director, and star, Aykroyd put it all on the line with this movie, but sadly for him, it was one of the biggest critical and commercial bombs of the year. I suppose he intended it to be a comic riff on the Texas Chainsaw Massacre, but it is one of the most misbegotten movies in the Classics of Crap series.
Seen by many during its long run on cable TV in the 90's, this movie was not easily forgotten. Ghoulish makeup and nauseating characters, including two greasy fat humanoids named Bobo and Lil' Debbull, make this movie a queasy, awful viewing experience. This movie has to be seen to be believed, if nothing else, for Aykroyd, in full monster makeup, playing the Judge, eating a foot long hotdog wearing a penis nose prosthetic. There's some nightmare fuel for you. So, am I recommending this flick? Sure, I'd say give it a shot on a rainy afternoon. It beats a trip through Mr. Bonestripper any day.
Posted by Jeff Victor at 11:35 PM

Hey Jeff, I love your Classics of Crap series. Nothing But Trouble, while clearly crap, is one of my guilty pleasures. How about that scene when Digital Underground gets brought in, then jams with Aykroyd to get out of the ticket? Astounding! Keep up the good work, I always look forward to the new Classic of Crap.

Wow, thanks Bob! Nice to meet you. I clicked over to your blog, and was amazed by the quality of your art! Brilliant work, sir. Thanks so much for checking out my blog, really glad you like it. :)
There will be a Classics of Crap book coming out sometime next year!
PS. Did you know that Tupac was in that scene rapping with Digital Underground?

I vaguely remember there being other characters besides Demi Moore's legs, but I couldn't really name any of them.

I've just downloaded iStripper, so I can have the sexiest virtual strippers on my desktop.