The Evolution of Gary Oldman 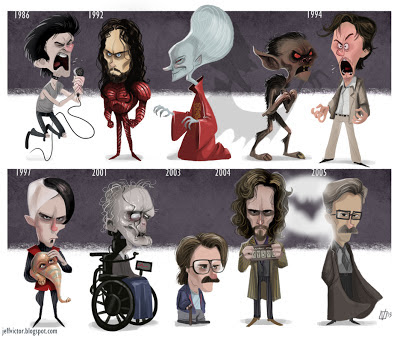 When you think of amazing character actors, one leaps to the top of the pack: Gary Oldman. Incredibly versatile, he is utterly convincing in whatever role he plays. The late 80's/early 90's were an especially ripe period where he zig-zagged from playing Sid Vicious to Lee Harvey Oswald to Dracula to nearly stealing the show in his few minutes of screen time as a drug dealing pimp in True Romance. In the late 90's he was well known for his villainous roles, but in the 2000's, he endeared himself to a new generation of fans by playing both Sirius Black in the Harry Potter films, and Commissioner Gordon in Christopher Nolan's Dark Knight Trilogy. Only one question remains: why hasn't this man won an Oscar yet?
Posted by Jeff Victor at 11:59 PM

You are great! I love your work, I think that your style is unique! May I suggest a future topic? :) What do you think of the evolution of ... Nicole Kidman?
I have often inspire his characters for my drawings, they possess very interesting features!

I hope you consider it! :)
Thank you for you works!

Hey Victor! Could you tell what kind of brush do you use to paint your illustrations? They are great! Thank you!