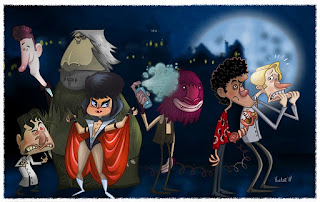 Welcome back to Classics of Crap, another sojourn into the wild world of awful, but great, but awful films.
I love monster mash movies. When I was a kid, I adored Abbot and Costello Meet Frankenstein, The Monster Squad, Son of Frankenstein, anything that paired up classic monsters. There was something so whimsical about them. For me, they had lost the power to scare, and had, by the mid 80's, been relegated to only spoofs. Enter the barely remembered Transylvania 6-5000, a hokey monster goofball flick starring Ed Junior Begley and Gold Jeffblum, if I'm remembering that right.
And then there's Michael Richards. As a kid, I thought his wild antics were the zenith of comedy. After reviewing the movie again, well, not so much. Still, there is much to like, such as Geena Davis' 'sexy' vampire costume. A few of the one liners are pretty memorable, like "I never counted on bazonkers!" I have fond memories watching this movie over and over as a kid, nearly pissing myself laughing. Watching it again, i think I cracked a smile once or twice. It's the perfect movie to watch after a lobotomy.
Posted by Jeff Victor at 5:31 PM

ah... Yes... MY eyes have braved they're way through this feature...
Love your sexy vamp geena davis...

Thanks for the comments, always love hearing your thoughts! :)