CLASSICS OF CRAP: VOLUME 13-Ilsa, She Wolf of the SS 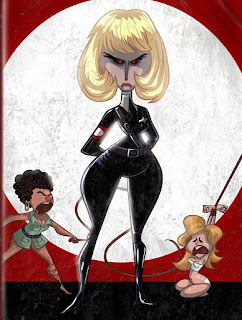 Hey guys! Welcome back to Classics of Crap, where we dig up cinema's finest garbage.

The early 70's brought a strange resurgence of Nazi imagery to pop culture from the satirical (The Producers), the psychological (The Night Porter), to the exploitational. Ilsa, She Wolf of the SS was the first of several Ilsa movies that I caught a few years back on video. Like most mondo cinema, these bizarre Nazi torture porn movies were all about degrading and objectifying women. I found a lot of what was in them really distasteful, but since the movie is so over the top, it because almost humorous. My favorite Ilsa movie, "Ilsa, Harem Keeper of the Oil Sheiks" is actually quite hilarious and features a German caricature being offered a young boy to, um, service him. He protests, acting as if he is in a sitcom, proclaiming he is not gay. Then, when the boy takes off his clothes, he changes his mind. Hey, what are you gonna do, right?
I actually don't recommend watching these. They are pretty hardcore, especially for squeamish viewers, but if you are in the mood to see some goofy topless Nazis torturing and killing, knock yourself out.