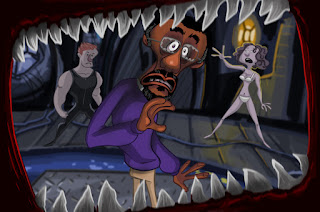 Welcome back to Classics of Crap, where this week we are celebrating bad shark movies. Boy oh boy, was it hard to choose what to draw. There have been SO many good/bad ones, trying to pick just one to spotlight in this column was tough. Sure, there is sharksploitation camp like MegaShark Vs. Giant Octopus, or even one of the most laughably unscary shark attack movies ever made, Shark Attack 3: Megalodon. I eventually settled on a shark vs. human movie that people may have actually heard of. Deep Blue Sea was probably pitched as "Jaws on Crack", because that's how it feels at times. The movie stars supermodel Saffron Burrows (who the film wastes no time getting into her underwear), the awesomely underrated Thomas Jane, and Samuel L. Jackson, (essentially playing the part of the lawyer in Jurassic Park), and a foul mouthed parrot. The film is probably best remembered today for the way (SPOILER ALERT) that Samuel L. Jackson gets eaten. He meets his end in a supremely unexpected and hilarious way. I liked Deep Blue Sea as a campy action movie, but it is utterly preposterous and impossible to take very seriously. Best part: when the sharks introduce Stellen Starsgard to a pane of underwater glass.
Posted by Jeff Victor at 12:35 AM