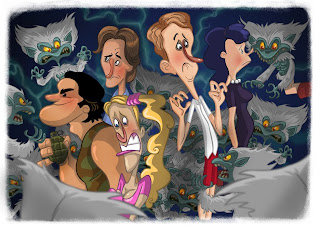 Welcome back gang, to another edition of Classics of Crap. Today we are looking at a really, really obscure movie called Hobgoblins. Originally made in 1988, I actually discovered this movie in a crappy, hole in the wall video store while I was in college. Amused by the box art, I watched it and couldn't believe how shockingly, howlingly, mindbendingly amateurish it was. (There are actually more than a few instances where the filmmakers literally forgot to remove the tape marks to indicate the spots where the actors need to stand.) I decided I had found a new unknown camp masterpiece, and I showed it to everyone I could drag to my apartment. Years later, I discovered that Mystery Science Theater 3000 did a great commentary track and I've watched it over and over. If you can track down an original copy of the movie, I would recommend it. There's some great scenes that aren't on the MST3K version, and every craptacular frame of this film is worth watching. I have seen this movie possibly more times than a human being should, and it earns my highest recommendation as a true Classic of Crap.
Posted by Jeff Victor at 11:56 PM