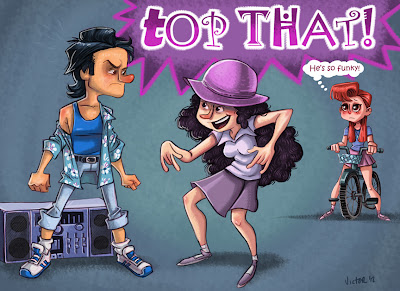 Hey bad movie fans! Welcome back to another totally rad to the max edition of Classics of Crap! If you are a certain age, you probably remember a movie called Teen Witch. They used to run it ad nauseam on basic cable in the early 90's. It was utterly horrible, but somehow I couldn't stop watching it. I was hypnotized by the awful acting and the most atrocious musical numbers I've ever seen. Watching it again just the other day I had a little more perspective on how unbelievably 80's it really was. It's pretty much mindless teen fluff about a girl who discovers that magic may be nice, but it's what's inside that counts. HA! Not really! In a surprising twist, the girl learns nothing, alienates her friends, kills(?) another student by making him disappear, and ultimately becomes super materialistic shallow brat by getting what she wants. Wow, thanks 80's. It's really the songs of Teen Witch that launch it into Classics of Crap glory. Please watch this musical number to "Top That" and try not punch your computer.

Discovered your blog via TDW so I'm going through and commenting on EVERYTHING, I guess.

But I loved this movie when I was 6, I guess. Was really expecting to have magical powers when I turned 16. Worst birthday ever.

This is one of the most creative pieces I've ever laid eyes on.