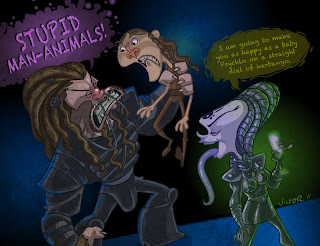 Hey guys, and welcome back to Classics of Crap, where I illustrate one of my favorite so-bad-it's-great movies every week. For my money, you can't have a list of crappy movies without including John Travolta's epic sci-fi clusterf**k, Battlefield Earth. Set in the year 3000, this would-be epic pits the last few remaining humans against a race of conquering aliens called Psychlos. Because the humans have regressed back to an almost primitive state, you could have almost called this movie "Cavemen vs. Aliens". That sounds pretty awesome, but alas, what is on the screen is nothing short of a hilarious cinematic disaster.
Much ink has been spilled over how bad this movie is, so I won't delve to deeply into criticizing the direction, the acting, etc. What I will say is that it makes for a spectacular lesson in celebrity schadenfreude. Pushed into production by devout scientologist and canned ham John Travolta, he bites off more than he can chew, not just producing this disaster, but also starring in it as the evil Psychlo Terl. Chewing up the scenery, he is buried beneath possibly the most awkwardly designed alien costumes ever created. This decision nearly cost him his career. If you have two hours you'd like to waste on this trash, Battlefield Earth is streaming right now on Netflix. If you have more important things to do with your life, like, you know, ANYTHING ELSE BUT THIS, here's a clip.
Posted by Jeff Victor at 10:27 PM

glorious!
but i'm happy to say i never seen this, and no intend to anytime soon!
stupid bar scene... han shot first!

I've not seen more then a few minutes of this feature and I'm also not sure I wanna dig any deeper into it. Brilliant image though... I'm a fan of the colors and the wacky expressions on the warrior figures...

I'm sure that xenu approves this image..

Thanks guys! I love getting your feedback on these! :)

Thanks for your information bro...
* Download Battlefield 4 for PC