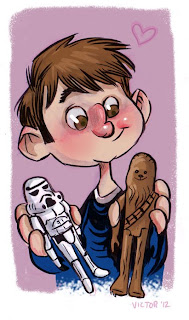 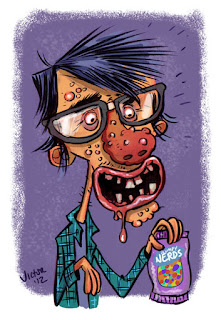 Hey guys, here's the next batch of the drawing challenge I'm doing with my work friends. The pic at the top represents "Turning point in my life". For this I chose getting my very first Star Wars action figures. I remember it well. It was just before Return of the Jedi came out, and I received a Chewbacca and Stormtrooper figure. Having never seen the movie, I didn't know who these characters were. (I thought they were a gorilla and a robot, actually.) These two toys turned into several hundred as they began a life long hobby of collecting toys and especially Star Wars toys. The best part? I still have these original figures!
The next challenge is to draw your favorite candy. It was a tough call, but I really enjoy Bumpy Nerds, which are nerd coated jellybeans. If you haven't had these yet, you gotta run and try them, they're amazing! Since just drawing a bag of candy didn't seem like that much fun, I drew a bumpy nerd holding a bag of bumpy nerds.
Also, a bonus pic of Lisbeth Salander from the Girl with the Dragon Tattoo. Not based on the movie, just my own image of her in my mind. Thanks for reading, and I'd love to hear your comments! :D
Posted by Jeff Victor at 10:19 PM

Everything is Zen in these dude... Also a big fan of Nerds though I haven't had these bumpy ones you speak of...

will have to go spend money now...
Keep on rocking mate..

Very cool Jeff. I too loved playing with the star wars figures as a kid. I still have mine in a box. They're well worn and loved. My kids want to play with them but I won't let them. Maybe one day.

star bumpy dragons to you!