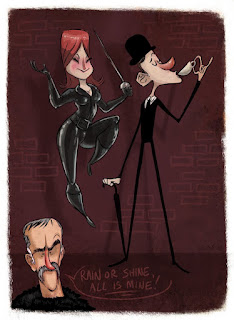 To coincide with next week's release of the movie The Avengers, what better way to celebrate by digging up the last theatrical Avengers movie! No, this isn't about Marvel superheroes. It's about British spies John Steed and Emma Peel and their battle against tyrannical douchebag August De Wynter and his plan to conquer the world with weather. (Yes, that old chestnut.)

Oh man, this movie is such crap. It would be utterly forgettable had it not featured some of the most bizarre scenes ever in movie history. De Wynter (get it?? GET IT?? He controls weather!! Har har) has a group of henchmen, and to protect their identities he dresses them up in giant stuffed bear costumes. WHAT? WHY!? Then to make matters worse, he assassinates them in the most hilarious way possible. Ralph Fiennes and Uma Thurman(who should have known better) are the two heroes, and they play everything in this remote, detached way that indicates that they're just waiting for their paychecks to clear. Either way, the on screen result is nothing less than a disaster. And don't even get me started on the missle firing bees. Yes, I said bees. Should you check this movie out? Probably not, it's a tough slog. Check out the highlights on YouTube, then go watch dirt grow underneath your fingernails. I guarantee it will be much more stimulating.