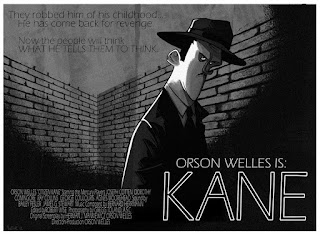 Hi guys, and welcome back to another edition of Classics of Crap. Today's crap movie is the utterly overrated and overpraised Citizen Kane. Honestly, I have no idea why this movie is considered a great film. It's in black and white, the dialogue makes no sense, and it's all about some fat rich guy. Who cares! The protagonist has no character arc, other than he gets mad, breaks things and pushes everyone around. Hooray. Also, he misses his sled. Are you serious, Hollywood? This is such a load of bollocks.

Where do I begin with this movie? It's utter crap from the first frame. I was nodding asleep by the 10 minute mark. The plot of Zardoz makes more sense than Citizen Kane. Don't get me started on the awful cinematography. How can we tell what's going on if it's not in color? Anyway, you probably haven't seen this movie, but if you are stuck in some dreary college film studies course, they may try to force you to watch it. I recommend stabbing yourself in the eye with the nearest sharp object. This is the worst film ever made, and trying to watch it will just drive you to suicide.

Um, are you kidding? This movie is wonderful. It revolutionized cinematography. Your biggest gripe is that it isn't in color? Really? I can't tell if this is a serious review or not, but it seems really misguided. It kind of comes across, "I didn't like this film, so it's the worst!". I mean, jeez, have some actual criticisms other than "It was black and white".

Jesse- Look at the last sentence of the paragraph. It was an April Fool's Joke. ;-)

Hahaha Okay, That's what I had hoped. I really like this film and got worried when you bashed it so. XD

I love this kind of humor, but I was a little unsure of it. Great drawing by the way. :P

And I totally missed the April Fools line. How did my eyes not see that? hahaha