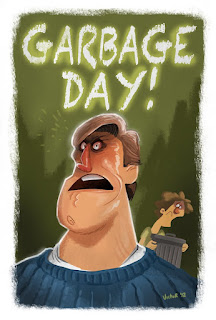 Hey guys, and thanks for returning for another round of me completely wasting my life watching awful, awful movies. This week's Classic of Crap is the sequel to one of the most infamous slasher films of the 80's, Silent Night Deadly Night. Released in 1984, the original Silent Night was the subject of much controversy at the time, as it depicted a disturbed young man killing folks wearing a Santa outfit. A lot of tongue clucking puritans complained, and the notoriety caused the movie to be somewhat of a cult hit. Flash forward a few years later, and some genius decided the time was right to make a sequel. Trouble is, they only had a tiny budget. Answer? Fill the film up with no less than 45 minutes of flashbacks recycling material shot for the first movie. How cheap and lazy can you get? When the film STILL came up short, they even padded the end credits. Shot in 10 days, SNDN2 is a laugh riot. Many of the scenes routinely pop up on YouTube, including the most famous bit, the "Garbage Day" clip. But trust me, this is totally not the only thing this movie has going for it. It is filled to the brim with hilarious acting and kill scenes. The lead acts with his eyebrows, and it's almost hypnotic to see them bouncing across his face like hairy jumping beans. Oh man, this movie is so bad it's good. It's kind of obscure, but I highly recommend grabbing some friends and some beer, and cracking up at this mess.
Posted by Jeff Victor at 1:47 AM

Very nice blog. Dude that drawing and video is RAAAWWWW!!!

The sequel picks up on Christmas Eve some years after the first one, with the 18-year-old brother of the first film's killer, Ricky Caldwell, being held in a mental hospital, awaiting trial for a series of murders he committed. While being interviewed by psychiatrist Dr. Henry Bloom, Ricky tells the story of the murders his brother Billy committed through a series of several flashbacks that use footage from the original film, as well as some new shots inserted in the flashbacks to make Ricky appear in more of Billy's original story.